What is Skeeter Syndrome?

Just as the name suggests, Skeeter Syndrome is an allergic reaction to mosquito bites. As if having mosquitoes around wasn’t already annoying enough already, people with Skeeter Syndrome dread summertime because that means every time they get bit, the bites will inevitably swell up and they could possibly come down with a fever or worse.

Skeeter Syndrome is more than an annoyance for some it can be life interrupting, imagine if just one mosquito could stop you in your tracks for a whole day or even more. So where does it come from and why are some reactions so extreme?

Skeeter Syndrome is caused by allergenic polypeptides in mosquito saliva, when the mosquito bites an affected person their skin will then swell and become hot and uncomfortable, that person could then come down with a fever and that would just ruin anyone’s day. It is not contagious but there is also not a blood test that can check for mosquito antibodies in blood, so the only way to know if you have it, is for your doctor to determine the severity of your reaction to mosquito bites. If you suffer from Skeeter Syndrome, anywhere from a few to 48 hours after you’ve been bitten you will experience localized swelling and redness around the bite. The skin will be hot and uncomfortable, for many reactions and reaction times vary.

Skeeter Syndrome is most common in those with lower levels of immunity such as children and the elderly. Typically, the average healthy adult already has a tolerance against mosquito bites. A person with Skeeter Syndrome will have a far more extreme reaction to a mosquito bite involving redness and fever. In some extreme cases a person may have a similar reaction to that of a bee sting.

Typically, a mosquito bite wouldn’t be considered dangerous, and to most individuals with Skeeter Syndrome it is not dangerous. The reaction to a mosquito bite varies by person with Skeeter Syndrome, from the first bite up to 48 hours later symptoms can continue to appear. The most common symptoms are swelling and redness around the bite, itching and uncomfortable skin around the area and possibly even a fever. One of the main concerns with Skeeter Syndrome is the risk of infection afterwards. A person who suffers from Skeeter Syndrome may be more susceptible to infections because the person is likely to be in discomfort after a bite and possibly scratch the skin, opening them up for possible infection. In rare cases, reactions are similar to that of a bee sting including bumps on the skin and anaphylaxis has occurred.

While it is rare, it is still possible for Skeeter Syndrome to be dangerous. For those with compromised immunity could be at risk for Skeeter Syndrome, that is why prevention is the best approach. Keep young children covered in whatever form of protection you choose be it long clothing or loads of clothes and even better if you can keep them inside to avoid getting bitten.

How do you prevent Skeeter Syndrome?

If Skeeter Syndrome has you pressing your nose against the window all summer long wishing you were outside, get ready to open the door because there are steps you can take to avoid those pesky bites. If you know you have a severe reaction to mosquito bites the best prevention method is to carry plenty of bug spray around. Find a brand of bug spray that you; trust, that feels good on your skin, is healthy for your skin and most importantly, keeps the biggest and maddest of bugs away.

Secondly, wearing protective clothing like long sleeves and long pants is another way to reduce your chances of getting bit. Try other products such as bug repellent bracelets or citronella candles, there are even fun stickers for kids to wear that provide an aura of repellent. For folks who prefer a natural approach, essential oils such as lavender and lemongrass have been known to keep the bugs at bay, find an essential oil mix that works for you and the bugs and mix with water in a spray bottle to keep handy.

Lastly, know where you’re going, if you are camping in a humid forest, there will be mosquitos, if you are in the frozen tundra, your chances are less likely but you’ll be wearing long pants anyway. And if you’re still worried about getting bit, try combining all of the above for a smelly but sure proof way to keep more than just the bugs away.

How do you treat Skeeter Syndrome once you have it?

If you are having extreme reactions to mosquito bites, and your doctor has ruled out skin infection, there are remedies to make you feel better, most of which can be done at home and are pretty accessible to everyone.

Oral antihistamines are a quick fix for swelling and itching and can be purchased over the counter. Hydrocortisone creams can also provide fast relief from itching and can be applied directly to the bites. Ice and elevation are probably the easiest remedies and help to reduce swelling, redness and discomfort. Oatmeal has been known to treat skin inflammation and dryness and can be a natural source of relief from the symptoms of Skeeter Syndrome. Apply cool oatmeal directly to the skin as a mask or even soak in an oatmeal bath for full body relief. In more extreme cases, medical procedures provide relief to bite sufferers. Allergy shots are a long-term treatment for Skeeter Syndrome and require some commitment to a treatment plan. If you are one of the rare individuals with extreme reactions to mosquito bites and it is affecting your daily life, you may want to consider an immunotherapy treatment for permanent relief.

While the prevalence of Skeeter Syndrome is unknown, what we do know is that it is not contagious. Since it is an allergic reaction typically the symptoms will go away after a few days, if you are experiencing uncomfortable reactions to mosquito bites or just need the peace of mind, it is a good idea to go see your doctor. If you are experiencing severe reactions such as swelling or difficulty breathing you should seek emergency medical assistance right away.

Nobody likes mosquitos and those with Skeeter Syndrome have probably had enough of missing out on all the summertime fun. While it is unfortunate, it is also manageable for most, from home remedies to prevention. If you’re after a more permanent solution and haven’t found a way to wipe out the earth’s mosquito population for us all, then try speaking with an allergist, they can give you the peace of mind you need and a personalized long-term treatment plan. 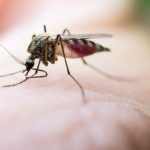 How to Keep Mosquitoes from Biting