Keeping Wasps and Hornets Away from the House Wasps and Hornets have created chaos for humans since the beginning of time.  Despite being annoying and sometimes scary with their belligerent behavior and tendency to sting when provoked, wasps and hornets can also be very beneficial to have around. These flying insects are predators and feed on many other unwanted insects you can find in your backyard, offering free pest control. On the other hand, wasps and hornets can be dangerous as well. Unlike many varieties of bees, they can sting you repeatedly when angered; their painful stings can provoke allergic reactions — even venom anaphylaxis in some people —  and can invade your personal space by building a nest in places like attics, eaves, and garages.

Sometimes, they can sneak in through your window and surprise you, buzzing around aggressively. These are unwanted guests you would never want in your home and often encourage panicking to find ways to get rid of them. In most towns and cities, you can call pest control services to deal with an infestation of hornets or wasps. These services are generally equipped to provide you with protection for a long time, months or whole season. On the flip side, these services can be quite expensive and not everyone can afford them. For those of you who prefer not to pay for an exterminator, here are a number of simple techniques that are inexpensive and can save your house from an infestation of wasps or hornets and you from being attacked by them.

4 Natural Remedies for Wasps and Hornets

What’s better in this world than using natural, organic blends to keep away hornets and other nasty flying insects? The excessive use of aerosols has its downfalls, most notably the ability to damage to our environment, and some pesticides are extremely dangerous as well.  They not only have the ability to hurt people as well as plants, bees, and animals, so by using this natural blend you are not only fighting wasps and hornets but doing your bit to help conserve our environment. Some home remedy experts have noted that a combination of clove, lemongrass, and geranium essential oil keeps away wasps completely. You can start by putting drops of these oils in a container with water. After mixing the drops in the water just spray the blend in the areas where wasps and hornets are most likely to show up or come from, such as any nests you might come across. While this method isn’t necessarily peer-reviewed by university scientists, it is worth a try given its low expense and natural recipe.

Another eco-friendly way of keeping wasps and hornets away is by using soap and water in a spray bottle. This is one of the oldest methods to keep away such insects. Spraying a mixture of soap and water into their nests kills them instantly. This occurs because soap clogs the breathing pores of insects. As a result, it becomes very difficult for them to breathe and therefore, they eventually die.  This is also a great mix for killing other nuisances such as boxelder bugs and some types of ticks.

Many people aren’t aware of this but some plants can actually repel pests. Plants such as citronella, thyme, and eucalyptus naturally deter insects like wasps and hornets. Growing these plants in your backyard will not only keep away these pests but also add beauty to your garden. It is a very effective as well as ongoing method of wasp control.

These are used to cover a flying insect nest.  This is quite a risky way of keeping away wasps and hornets, as the chances of them stinging you is greater than you think, and remember, they can also sting you multiple times if they get the opportunity. So, remember to wear a pest-control outfit that will cover your entire body when you set up aerial nets. On the other hand, this method can be performed during the night when the wasps are least aggressive. Carefully place a fine mesh net or a piece of cloth on the nest and quickly close it completely from the top, thereby sealing the insects inside. Then, place the bag in the bucket of water to drown all insects in the nest.

2 Stronger Ways to Get Rid of Wasps and Hornets Sprays for Wasps and Hornets

Irrespective of the environmental hazards associated with these chemical sprays, they are very effective means of keeping the wasps and hornets from becoming a threat. The synthetic chemicals present in these sprays are toxic to the insects and will kill them instantly. Tetramethrin is a common ingredient present in many bug sprays. It is highly toxic, and if a wasp comes in contact with it, the insect will die. Phenothrin, On the other hand, is a commonly used chemical that forms a barrier invisible and repellent to wasps and keeps them away. Another benefit of these sprays is that they can be used both in the indoors and outdoors. Below are two popular sprays that we have used to keep Hornet and Wasps away and eliminate infestations:

Wasps can actually be trapped.  That is because they are so attracted to sugar and nectar that when they are near it, they can’t resist it. Use it in a trap, and you can lure the yellow jacket in and it will not be able to leave. We love solutions where you are basically using the pest’s natural instincts against them.

Every go to a fair or outdoor festival in the fall, and see the wasps gathered around sugary drink dispensers or cotton candy?  That is because wasps just cannot resist sugar, so it obviously makes a good bait for them.

The traps are relatively safe to have around, and they include no pesticides. Still, it is best to hang the trap away from where pets or children might be.

You can find a good trap from Raid here (on Amazon).

Are Wasps and Hornets the Same?

Almost, but no. Hornets are part of the Wasp family. So while every hornet is in fact a wasp, wasps can be hornets but can also be other species of wasps.

Why are Wasps and Hornets so Active in the Fall?

Wasps and hornets change their eating pattern in the fall, and loves sweets and sugars. That is why you see them around your flowers, or hanging around your picnic or a fair in the fall.  Earlier in the year, their eating habits focus more on insects.  The wasps are binging on sugars before they die off at the first hard frost.  If you plan to have an outdoor party in the fall, and you have wasps in the area, you might want to consider setting out some traps (as we described above) or even having a mosquito racket or two around for the random invader.

Yes, but they are weak pollinators. Compared to a honeybee or big fat bumblebee, wasps and hornets do not pollinate much. They are just not built in the same way, and when they do land on a flower, they do not collect much pollen on their body.

While we are very protective of bees and the important pollinator role they play, wasps don’t have the same purpose.

Is There Anything Good About Wasps or Hornets?

Yes. In addition to being lite pollinators, wasps and hornets eat unwanted insects that would otherwise likely see big population increases.  One good example is the aphid, which often can be destructive to gardens. Wasps will gladly have the aphids for a meal and over time this helps keep the aphid population from exploding.

How do I Spot a Wasp Nest?

It is important to be able to know the difference between a wasp or hornet net and a bee hive.  The last thing you want to do is kill a bunch of bees!

Luckily, the difference is clear.  A wasp or hornet nest will look like it is made out of paper. Its layers will resemble paper mache and will be thin layers of dry material.  A beehive will have a waxy look — much more like it is almost wet.  Not paper at all.  If you see a beehive, please don’t destroy it — instead, have a pro or hobbyist relocate it.

If there is an area where you observe wasps are starting to build a nest, and you are concerned that the location will put it too close to you or other humans, you can always deter them by spraying permethrin on the nest.  Permethrin is the same ingredient used in some of the best tick repellents, and will definitely deter wasps from proceeding on their nest. Just be very targeted with how you apply it – permethrin is highly toxic to bees and other desirable pollinators.

No. Although wasps enjoy nectar from plants, they are not equipped to make honey like a honeybee. Prevention is always the better strategy in the fight against such pests. As flying insects, wasps and hornets can buzz in and out of anybody’s yard and form nests in any spot they think looks attractive or safe or in close proximity to food. However, you can keep them away by making sure you cover your trash bins and maintain a clean and tidy backyard. In addition, the general maintenance of your home is important too, as they often look to build their nests in any cracks or accessible spaces in walls the can find. 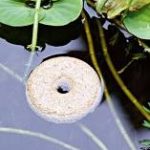 Mosquito Dunks and Bits: Our Review 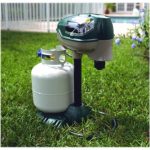