Ticks are menacing little creatures.  They crawl on you, sometimes bite you, and in a few cases can actually make you really sick.

These little bugs range in size from as small as the head of a needle to several times that size. They appear in different shades of red ranging dark red to brownish red before feeding. They gain their nutrition from pure blood. They feed on blood from their host and become much larger than their original size, up to the size of a marble. Their life cycle is both very interesting and worrying at the same time. Once attached to their host they feed from several days to several sometimes weeks. Eventually they become fully engorged, changing to a greenish blue color.

Once they are finished feeding, they fall off the host. This is where their breeding season begins. They lay eggs and continue to grow in number. They are capable of causing numerous diseases if not discovered and treated.

We want to arm you with some facts about ticks, so you can be better at avoiding them and the diseases they carry. Areas to look for Ticks

Ticks can be found almost anywhere, in lush forests, bushes, tall grass, and even in your back yard. They don’t let go any opportunity to hide themselves in areas of dampness and prefer to stay out of direct sunlight. They love areas near wood piles and leaf accumulation.  Keeping a strategic distance from these locations can help you avoid becoming a tick’s dinner.

Many pest control services state that having chickens around is an extraordinary approach to dealing with the problem of ticks. Now there are people that seem to be more attractive to ticks than others, while there are many that go out into forested areas and never encounter one. The reason is the unique natural aroma that all people have. Some naturally perspire more, their sweat is more alkaline and/or exhale higher amounts of carbon dioxide, all of which entice ticks. Some people also exude a wider range of  chemicals than others, and this to can make them a tick magnet if those chemicals are tick attractants. Other factors can include age, sex, and the kinds of bacteria found on your skin.

There are many different types of ticks. The most common and concerning are Deer Ticks and Wood Ticks.

Deer ticks are the most worrisome and are more commonly known as blacklegged ticks and are often mistaken for dog ticks.  They are “the Lyme disease tick.”

They are named for their propensity to feed on white-tailed deer. However, their hosts can include most small and large mammals, including humans. Unfortunately, we humans are often inadvertent hosts of deer ticks, and this is most concerning, because their bite can spread Lyme disease. They can also affect people in other negative ways. These ticks often afflict livestock and domestic animals. The deer tick has been identified in all U.S. states, except Hawaii, and are most abundant in the Northeast and Midwest portion of the U.S. One can easily misidentify a Deer Ticks as one of the many other species of tick. They resemble other species of ticks as their bodies are flattened and have eight legs as adults and nymphs. In the larval stage, they have six legs. A female Deer Tick in an unfed state is approximately 3-5 millimeters (mm) long. They are red and brown in color. Female ticks begin to appear darker when they are engorged with blood meal and usually grow up to 10 mm in length. Adult males are relatively smaller than the females. Nymphs are around 1-2mm long and the larvae are much smaller, normally only about 1mm long. The might appear to you as a rusty or brownish-red. This indicates that they have fed on your blood. The body expands substantially as they continue to feed and in the majority of the cases, they ultimately appear about half the size of American Dog Tick.

One of the most debilitating diseases spread by the bite of a deer tick is Lyme disease. The blacklegged/deer tick is the most common vector for this bacterial disease as it is easily transferred through a tick’s bite. Although deer ticks don’t have the ability to jump or fly, they keep themselves hidden in the grassy areas frequented by animals such as cats and dogs. As any of their hosts brush against the grass, deer ticks grab onto them and cling to the coat of these animals and shortly thereafter, start to feed. As ticks can bite a potentially different host for their next meal, they are capable of spreading the disease throughout the population. Their small size is a major advantage. Their bite is not painful, and the victims may not notice any trouble until the tick reaches the point that they have become engorged with intense feeding.

Wood ticks are also known as dog ticks, or the American Dog tick.  They are larger than deer ticks, and more abundant.  Most of the ticks you find on you are wood ticks.

Wood ticks are less of a health threat.  Of course, you never want a creature biting its way in to your blood stream, but at least for now wood ticks don’t carry the same severity of disease.  While they carry some diseases such as Rocky Mountain Spotted Fever, a much smaller percentage of wood ticks can get you sick, as compared to deer ticks.  Wood ticks have a circular crest on their back, right behind their neck.  It is usually lighter in color and is a dead giveaway that you are dealing with a wood tick.  The rest of their body is usually a dark or light brown.

Can you Prevent Ticks?

Absolutely, there are a few things you can do to make sure you stay tick-free.  It requires some vigilance — unlike a mosquito, you can’t feel their bite, and they don’t give themselves away with an annoying buzzing sound.

A things you can do:

Ticks Have a Long Breeding Cycle

Ticks have a longer breeding cycle than you might expect.  Compared to mosquitoes, their cycle is downright forever.

Ticks lay their eggs in the spring.  These “tick nests” are actually just clusters of eggs.  Then, the eggs sit all summer, fall, and winter.  The ticks will emerge as larvae in the late winter, and begin growing that spring.  All the while, new tick eggs have been laid for the next year’s crop.

Ticks don’t really jump on you, and they really can’t move fast enough to chase you down.  Unless you are laying in the grass having a nice nap, a likely way that a tick will find its way to you is to fall or drop on to you.  They get on a long piece of grass, or on a branch, and then free dive on to you as you walk by.  Pretty impressive when you think about it.

That is why keeping grass clipped and shrubbery trimmed can reduce ticks — because it gives them less opportunity to find a perch to dive on to your shoe, pantleg, or shoulder.

Tick range is expanding considerably.  While they prefer not to be in dry, arid areas — they need some humidity to survive — they have been gradually expanding their range for years.  If habitat is suitable for ticks, they will find it.  See the image for the 20-year change in blacklegged tick range.

Once a tick attaches to you or your pet, they typically will eat for 2-3 days as long as they are not interrupted by you.  This gives them plenty of time to get what they need from your blood.  The blood is not just a favorite food of theirs, it is critical to their lifecycle.

If a tick is infected, it is likely infecting you after a few hours of being attached (but there is some emerging debate on that, an a tick might be able to infect a human pretty quickly).  It will eat and eat until it becomes quite large, if uninterrupted.  If you find an engorged tick on your dog, for example, it has likely been there for at least a couple full days and maybe more.

Deer Ticks should earn the same amount of concern from you as mosquitoes have. These little monsters can put you in danger without you even knowing.

What makes tick such effective predators is their small size.  Especially when ticks first come out in the spring, they can be in the nymph stage and can be very difficult to spot. However, for the identification of the deer ticks, you must keep in mind their color and these other characteristics. They naturally have a darker color with a rusty hue. Their bodies are flattened and might appear engorged when fed. They are approximately 2-3 mm in length. They hide in the grassy areas where the soil is moist and damp. However, you can get rid of them quite quickly following these tips for locating them. 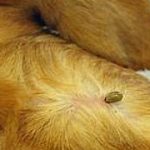 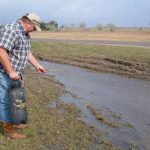 5 Ways to Control Mosquitoes in Your Yard