Mosquito Range in the US

Mosquitoes have flourished on our planet for millions of years. The little flying nuisances exist on every continent except for Antarctica, and their ability to reproduce in very limited conditions has made them more prevalent than ever. Do understand the different geological areas where mosquitoes thrive and the period that best suits them, we will jot down some states in the USA and the whole of North America where these bloodsuckers love to coexist with their potential human hosts.

As the days shorten and temperatures drop, adult females and their larvae can enter a low metabolism stage called diapause allowing them to survive the rough conditions. During this phase, a gene in them shifts the mosquito diet from mere blood to fats and different forms of sugars. Mosquitoes in the state of diapause will then isolate themselves to residing in tree holes, home basements, and many even go through the winters in a state of semi-hibernation. The eggs will straightaway become dormant and await the warmer season to develop before hatching into larvae. If the circumstances are just so, larvae will enter diapause much sooner than the females laying the eggs leading to the accumulation of dormant eggs.

And then comes the spring season when mosquitoes awake from their winter sleep and become most active. Melted snow provides the mosquito with the perfect opportunity to carry on with their breeding habits and thus laying eggs. Eggs that have accumulated during the fall season begin to hatch. Additionally, invertebrate predators of the mosquito won’t awake for another month, and the first weeks of spring become the high season for mosquitoes to freely do as they wish. This serves as the period where they multiply in thousands via mating and laying eggs.

The USA, unfortunately, hosts several states that fall into the similar situations as mentioned above. Ideal weather conditions and steps taken by some local state bodies to control amphibian and reptilian populations has contributed to several mosquito ranges to develop over time. Several cities in the USA have their fair share of mosquitoes. The top cities with many mosquitoes according to Orkin’s list of Top Mosquito Cities include

The temperature and weather conditions play an important factor. As the weather begins to cool, you’ll likely notice a decrease in the level of mosquito activity on your property. Non-hibernating mosquitoes will begin to pass away as the temperature approaches the 50° F mark, while the hibernating species will start to seek winter refuge in hollow logs, abandoned animal burrows and other convenient hiding spots.

The first frost is usually a reliable sign that mosquito season has ended. However, it’s possible that some hibernating mosquitoes will spur up during unexpected warm spells during winter, only to return to their hiding places when the temperature drops. A Zika-carrying mosquito range map by CDC and USA Today

As far as the warmer regions in the United States are concerned, the mosquito season in Arizona typically begins in early March and would continue as long as the weather is suitable for the mosquitoes to find hosts and breed effectively. The mosquito season in Florida, however, will vary mostly depending on which part of the state you’re located in. If you find yourself in the cooler northern regions, you would usually experience the bloodsuckers around your patio at the start of March.

For residents living in South, Florida mosquitoes can make their way into the free air as soon as February. This is because around these months, southern cities and towns in Florida average a temperature of around 28-degrees Celsius, which is more than ideal for mosquitoes to thrive in. Additionally, occasional showers and a wet weekend would be the perfect fix for mosquitoes to mate and lay eggs, leading the way for more of them to be hatched into this world. The tropical South Florida climate is especially conducive to the mosquito lifestyle, since mosquitoes are attracted to moisture and humidity for breeding and laying eggs.

The same is the case for places like Atlanta and Chicago where the “tropical” sun helps these bugs to roam around freely. This has been a major concern for several residents, especially recently (at the time of writing this article) with the news of the outbreak of Zika Virus. Travelers from Southern American territories have introduced the disease, and ineffective screening of affected travelers has been a reason to the effective transmission of such viruses from one continent to another.

In contrast, the mosquito season for some fortunate place in the United States like Alaska has been notoriously concise. The mosquito season in southern Alaska usually initiates at the start of May; it has been observed even to begin as late as mid-June in the northern regions of the state and come to a close by late July. The reasons tend to be the climatic perks in the form of cold and extreme weather conditions found Alaskan territory making it tough for mosquitoes to function properly outside the mosquito season.

In the Northeast, however, the steady warming trend that has occurred in recent years has produced a larger mosquito season. Decent weather and occasional rain have made it very easy for mosquitoes to thrive. The same can be said about Maine. Mosquito season begins in the middle of deerfly season, and lasts from the third week of June all the way till August.  Maine mosquitoes are larger in size making often being made part of several jokes and how the mosquitoes are the State Bird of Maine.

Bottom line, mosquitoes continue to prevail almost anywhere you go but the period and their general activity will depend greatly on the state’s weather conditions and the mosquito specie in general. So pack a couple of mosquito nets and repellant lotions because you’ll come across these vampires everywhere.  Notice the map above showing the range of the two mosquitoes thought to carry the Zika Virus, supplied by the Center for Disease Control. 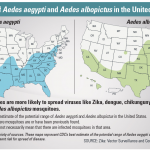